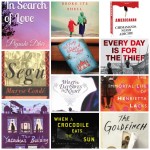 There is something about the act of reading that has the power to transport you into a whole new world. A unique world- where the writer sketches the outlines and the reader fills the colours with their own imagination.

As an expatriate in Ivory Coast, Africa, I heard of a group of women in Abidjan who have formed a Book Club. Excited to find people who share my passion for reading, I joined the club. Each month, we zero in on a new book, read it back at home and then gather to discuss our views and thoughts about the book.

Not only do we end up sharing a wide variety of perceptions, because we ladies come from diverse continents and cultures, but we also discover a host of new books, as each member contributes their favorites as suggested reading.

For the upcoming year, this is the list of books we have prepared. Each recommendation has come after much thought and I expect each of these to be a gem, worth picking up.

I would like to spread the word and the joy of reading these books and hence I am sharing the list of books here.

Delightfully, the Book Club has chosen my debut novel as the opening book of the season! In Search of Love is a poignant romantic story about Ayesha and Parth, two people who were meant to be, but are torn apart by Fate. A story that will surely tug on your heart-strings. Having read and loved ‘Half of the Yellow Sun’ last year, the club was unanimous in including another of Adichie’s novels into the list this year. In this fascinating book, she explores the present in Nigeria, the inevitable migration to the first-world for anyone seeking a better future, the existence of racism in its very denial in America and the return of the characters to their homeland. You will undoubtedly enjoy her bold characters, their intellectual observations and the spin she plays on their relationships. 3. The Goldfinch, by Donna Tartt

A moving story of an orphaned boy who finds his way around the world, this novel has received conflicting feedback from readers. Go on Goodreads and you’ll be surprised by the polarized responses the book has received: there are as many brickbats as bouquets for this book. Notwithstanding the harsh criticism, the fact remains that The Goldfinch has won Donna the Pulitzer Prize. We’re going to give it a shot, are you? 4. The Immortal Life of Henrietta Lacks, by Rebecca Skloot

Rebecca digs up the story of Henrietta Lacks, a woman whose immortal cancerous cells were distributed around the world, without her knowledge, to aid research in the field. Skloot dwells on the family’s emotional ordeal, the vague laws and ethics around the collection of tissues and the dark history of medical experimentation on African Americans. This book is not just about science or medicine, but goes beyond to resurrect a woman who had been reduced to mere cells. 5. The Pearl that Broke its Shell, by Nadia Hashimi

Nadia Hashimi takes you right into the core of Afghanistan, wrenching you out of your modern comforts by showing you the reality of what happens in that country. It explores the well known and frequently practised custom of bachha posh in Afghanistan, where a female child is turned into a son, allowing her to explore the freedom and liberty of being male in a dominant patriarchal society. Strongly reminiscent of Khaled Hosseini’s works, this book is a must-read for every woman. 6. When a Crocodile Eats the Sun, by Peter Godwin

The story of Godwin and his parents, this book is about a man torn between his new life in America and his old one in Zimbabwe, between a future that beckons and a past that haunts. As the narrative flits between multiple countries and multiple pasts, Godwin sheds light on the collapse of Zimbabwe under Robert Mugabe’s reign, while coming to terms with the painful discovery that his father, now on his deathbed, had hidden his Jewish origins from his son. A controversial novel, The Yacoubian Building reveals the corruption, decay, religious fanaticism, fundamentalism and sexual repression in the Arabic world of Egypt. A bestseller in the country the book is based upon, The Yacoubian Building is now being featured as a movie. Described at once as “mesmerizing”, “controversial”, the book has won much acclaim for the manner in which Aswany has peeled open the layers of society in Egypt. 8. What the Day Owes the Night, by Yasmina Khadra

Set against the backdrop of the Algerian war of independence, this is a book about love, hope, loss, identity and humanity. The novel is about a young boy rendered into the care of his uncle in an Algerian town. At once the story of Algeria’s independence from France and Jonas’s journey from childhood to adulthood, What the Day Owes the Night is a book that has earned Khadra many accolades. 18th century Africa is slowly getting enveloped by external forces- the arrival of new religions, the onslaught of slave trade and the influx of outsiders. Segu is based on real events and captures a section of Africa’s history in a fascinating narration. The story is about a man and his four sons, each representing the forces in play within Africa: one son defends tradition, the second finds himself enslaved and traded, the third embraces Islam while the fourth gets converted to Christianity. Indeed, a beautiful way to chronicle the story of a continent. 10. Every Day is for the Thief, by Teju Cole

The protagonist of this book has just returned to Lagos in Nigeria after leading an established life for 15 years in New York. Accompany him as he tries to recapture his past, fit back into a hostile environment, come to terms with rampant corruption and make a place for himself in a homeland that has changed beyond recognition. Explore the mysteries and magic of Nigeria, as Cole encapsulates a nation’s soul in a book with a photographer’s eye for detail. 11. The Forty Rules of Love, by Elif Shafak

Written by a French-born Turkish writer, The Forty Rules of Love is a story within a story. Mystical, spiritual, intriguing and provocative, the book delivers a timeless message of love to the reader. A bored housewife’s journey from Northampton, New England into the 13th century story of a wandering dervish takes the reader into a world of spiritual discovery. What do you think of these books? What books would you recommend to the Club?